I’m experimenting, truly, with media so I thought it might be fine to include a video in this post which is a bit about Mayday.

May 1, Mayday, has been celebrated as some kind of holiday in many cultures and traditions, perhaps most especially in the British Isles.  Given the historical US ties to England, Mayday is one of those days that has been celebrated in the past, but maybe not as robustly as it used to be.  Perhaps its because of the unfortunate connection between Mayday and the former Soviet Union. Or maybe the customs surrounding Mayday have become out of date, obsolete and quaint. They have certainly died out in many places.

However, some of us persevere.

Besides getting up to dance the dawn in (which, full disclosure, I have been doing for the past twenty years or so!), children, and perhaps adults,  used to put together May baskets, or May posies, to leave on a neighbors doorstep or doorknob. With my kids, I considered this anonymous gift a way of paying back the kindness of neighbors who put up with Halloween!

Mayday is 1/2 round the year from Halloween, and in some countries is considered the beginning of summer (thereby making the 23/24 of June – midsummer – something I had deeply wondered about in my  younger days – mid-June did not seem like midsummer). Maypoles, May dances, Maywine, fire leaping, and other special activities were part of village or small town life celebrating perhaps, the end of cold weather and the start of truly balmy days.

If you are hankering to do more to celebrate Mayday, this year on Friday, you could cut branches from flowering trees or shrubs.  Most trees flower, really!

Or you could decorate a May bush with streamers, ribbon, leftover Easter eggs and other decorations.

A sort of May bush.

Finally consider making May posies or May baskets to leave for your neighbors with or without a note. It’s a small kindness when small kindness means a lot. 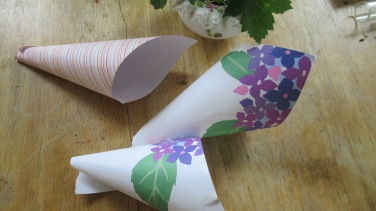 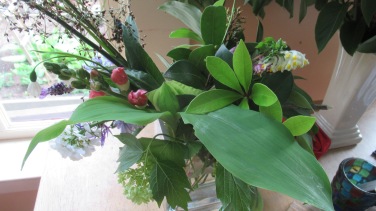 Here’s a link to the video,

Our own Library of Congress has some interesting history, backstory, and resources about Mayday celebrations both here and in England. Here are links to two of them: Mayday and dancing and May celebrations.

And here’s an NPR piece specifically on May baskets from a few years ago.

Whether you dance up the sun, leave neighbors May baskets, or just enjoy the day, have a wonderful first of May.