A group I volunteer with had their spring fundraiser today and a friend and I were in charge of the arrangements, color scheme, etc.

The space has a bright red wall which could have been a limiting factor. The other issue was sightlines.  And of course cost!  I chose a color scheme of black/white and green as there would be black and white comix for each participant and I wanted to echo the “flourishing” element of the theme in greenery.  To do this without being too “Christmasy” was the trick and I determined that a only touches of bright spring green would be necessary.

The red wall and an arrangement up close 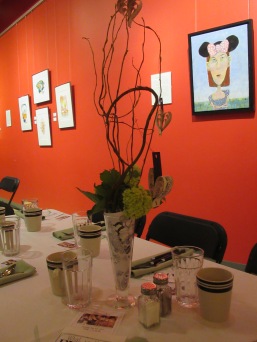 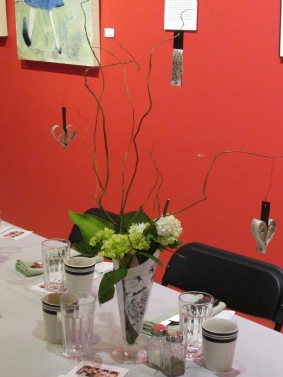 The little dangly hearts were made out of old sheet music and the “cones” were copies of the comic fit inside the pilsner glasses.  They added the right touch of color and whimsy to the event.